Security within the IT landscape is as critical as maintaining a strong armed-force for a country. To ensure that the IT landscape of an organization is secured from external threats, organizations lay heightened emphasis to avoid security attacks that can potentially bring down business operations within days.

The first step to ensuring security within your Docker platform involves using Docker best practices to keep your host secure. These include:

Note that the default container port is 2376, which enforces encrypted communication. We can now allow users to access the Docker API by having the DOCKER_HOST environment variable pointing to the host:

Now set the DOCKER_TLS environment variable to “true” to initiate a secure connection.

On the client side, activate TLS verification:

Then pass this in client certificates through the command line or by dropping the certificate into the .docker directory within the user’s home directory.

The Docker client will automatically pick up client certificates when we run the above command. Now, only clients with certificates signed by the CA server can access your Docker Daemon.

In Docker, we use namespaces to isolate workspaces. Process IDs, Networks, Mounts, Linux Timeshares, and InterProcess Communications all reside in different namespaces. Every process has a Process Identifier (PID) attached to it. When you boot up Linux, the first process to come on (PID: 1) is known as the root process. Every process can have several PIDs, depending on the namespace and container runtime.

Docker also assigns different privileges to different users. There are two main types of users in Docker: root and non-root. Root users have administrative privileges and can create, manage and delete containers; while Non-Root users are those without super privileges of a Root user.

To set a user ID through the Docker Command Line Interface:

You can also specify the user ID in the image’s Dockerfile:

Then build this image by running the command:

Capabilities outline the roles and privileges of various users in a system. The root user is the system’s most powerful user. Root users and processes have unrestricted system access, including, –

The full list of user capabilities can be accessed on the location /usr/include/linux/capability.h. 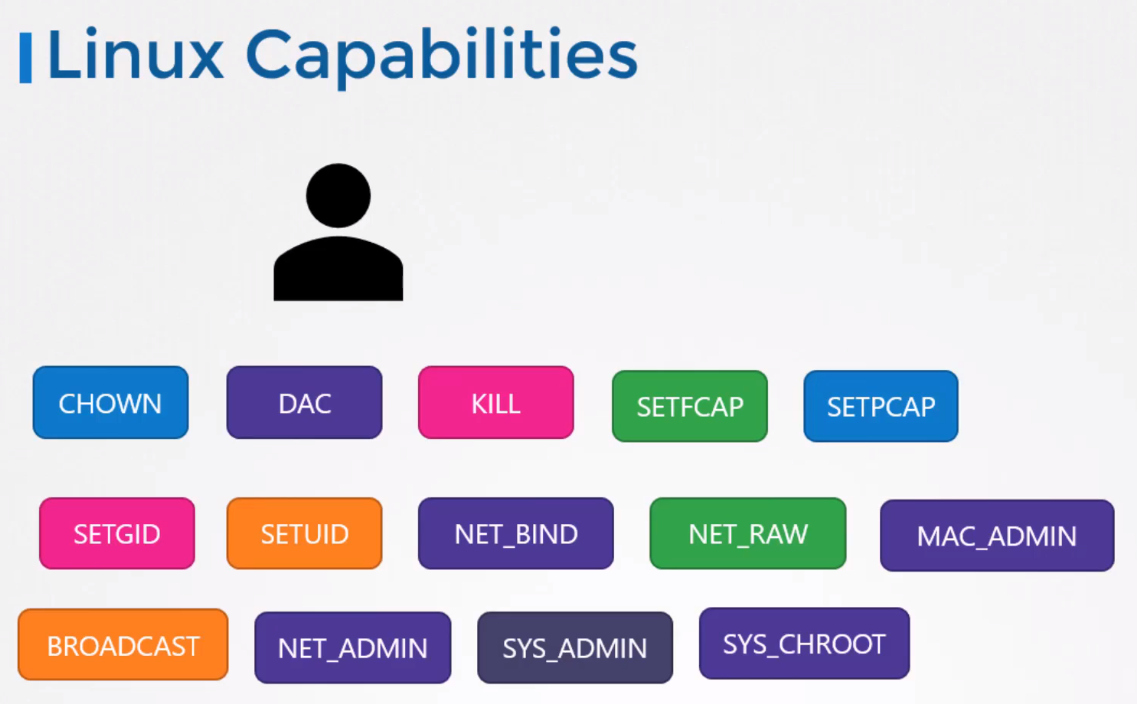 To check the capabilities of a normal container running, run the following commands in order:

For interacting with the network stack, instead of using --privileged you should use --cap-add=NET_ADMIN to modify the network interfaces:

Control Groups (CGroups) allow the allocation and distribution of resources among different processes and containers. 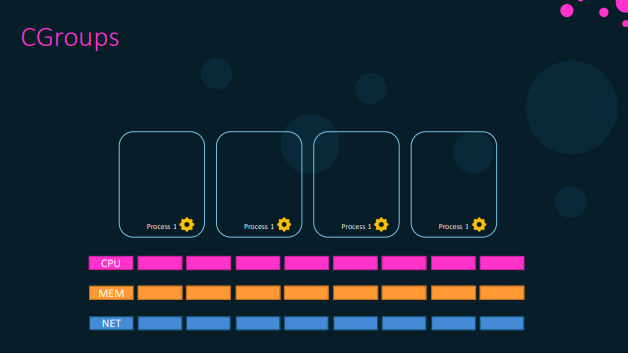 When two running processes need the same CPU, each process gets an equal share of CPU time. These processes don’t run concurrently. Instead, they take turns using the CPU, although these changes happen in microseconds, making it appear as though the processes run simultaneously. You can also allocate more CPU time to high-priority applications through CPU timeshares.

In this case, if process A gets a 1024 allocation while process B gets a 512 allocation, it will use the CPU twice as much but with the same computing power.

Docker uses Fair Schedulers to enforce CPU timeshares. Two of the most common schedulers in Docker are the Completely Fair Scheduler and the Realtime Scheduler. To allocate 512 CPU shares for a container, run the command:

You can limit CPU usage by defining the CPUs that a particular process can consume. We do this by specifying the CPU Sets. The format for defining a CPU set is:

Additionally, you can also limit the number of CPUs a process can use by specifying the CPU Count using the command:

With the above command, If the host machine has three CPUs and you set –cpus=”2.5″, the container is guaranteed at most two and a half of the CPUs.

To add or reduce the CPU count, you can update it with the command:

Without the proper mechanisms to limit CPU usage, a process/container could end up consuming too much CPU power, taking up most or all of a host’s resources, making that server unresponsive.

Every system consists of Physical Memory known as Random Access Memory (RAM). A process can consume as much RAM as is available within the host, unless we enforce some limits. When all system RAM has been consumed, Linux will use SWAP space configured on the host for memory allocation. SWAP space is space allocated on physical storage disks that can be used as memory. If a process uses up all RAM and SWAP memory, it is killed using an Out of Memory (OOM) exception.

You can specify the memory limit to be consumed by an application by including it in the command as shown:

You can also specify the SWAP space limit as follows:

In this case, you will have 0 MB SWAP memory since the allocation is usually the difference between the two figures. To allocate 256 MB to the SWAP memory, we’ll run the command:

To display a live stream of container(s) resource usage statistics:

This concludes the Docker Engine Security chapter of the DCA certification exam. To test your knowledge, it is strongly recommended that you access research questions of all core concepts covered in the coursework and a test to prepare you for the exam. You can also send your feedback to the course developers, whether you have feedback or would like something changed within the course.

1. What is a Linux feature that prevents a process within the container from performing filesystem related operations such as altering attributes of certain files?

2. What flags are used to configure encryption on docker daemon without any authentication?

[A] the container does not have access to swap

[B] the container is allowed to use unlimited swap

[C] the setting is ignored, and the value is treated as unset

4. By default, all containers get the same share of CPU cycles. How to modify the shares?

5. Limit the container webapp to only use the first CPU or core. Select the right command

6. Assume that you have 1 CPU, which of the following commands guarantees the container at most 50% of the CPU every second?

7. What is a linux feature that allows isolation of containers from the Docker host?

8. By default, a container has no resource constraints.

By following this study guide till this part of the series, you have prepared yourself to handle all Docker Engine Security questions and practical scenarios – and are of course a step closer to pass the DCA certification test.

On KodeKloud, you also get a learning path with recommendations, sample questions and tips for clearing the DCA exam. Once you are done with this section, you can head over to the research questions and practice test sections to examine your understanding of Docker Engine Architecture, Setup and Configuration.